Skip to content
Hokkaido is a vast island in the northernmost of Japan’s main islands. A great place to enjoy the beauty of nature since the island has a good number of national parks and volcanic mountains, lakes and geothermal springs.

Traveling to Hokkaido from Cebu needs two plane rides.  You take a four hour flight from Cebu to Narita and then take an hour and a half domestic flight from Narita to Chitose airport.  You have to dedicate one day of travel since the flight interval is sometimes more than 5 hours. 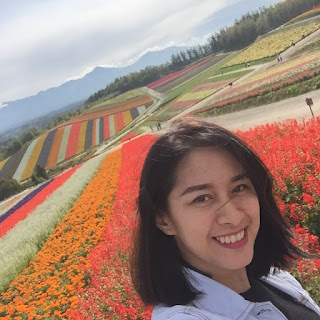 I was able to visit Hokkaido just between the end of spring and the beginning of autumn.  The perfect time to see the unique transition of colors where fields are filled with flowers of all colors, and in the wide, rolling hills the leaves on the trees are slowly turning to autumn hues of yellows, oranges and reds.
On my first night, I stayed at Obihiro in Tokachi Suprefecture. The most important and political center, a major agricultural area in the Tokachi plain. Located southeast of Hokkaido popular for its butadon, a rice bowl topped with cooked pork which I had for my first dinner in Japan

The next day, I started my excursion in completing the list to visit the locations used in the surprise blockbuster, romantic comedy Kita Kita.  First stop, Furano flower fields in Biei. Where blooming lavenders, marigolds, geraniums and other flowers of different colors spread as far as the eyes can see. After lunch, I then took a side trip to one of the town’s hidden treasures, the Blue Pond. Tucked in the lush forest of Biei-cho is this body of water that accidentally turned blue due to the eruption of nearby Mt. Tokachi in 1988. Recently, this beautiful pond was chosen by Apple as one of its wallpaper images.

Another hour drive and reached Asahi-dake located in Daisetsuzan National Park. We get to the top of this mountain which is 2290 meters high by taking the ropeway or a cable car. This is the location where Lea (Alessandra de Rossi) and Tonyo (Empoy Marquez) were hugging each other clad in white plastic raincoats while the mountain in the background were spewing white smoke.

On my third day, I went to Otaru to try the canal cruise, this is where the characters in the film cruised on a gondola.  The tour took 40 minutes where I learned that this historic canal was built in 1923 as used to be a part of the busy port where many ships were unloaded by hand until World War II. Now it is a favorite romantic place with walkways lined with gas lamps on one side and warehouses transformed into quaint cafes and restaurants on the other side.

In Otaru, I was also able to visit the music box museums and shops. It is spread across a number of buildings around the area. In the movie Tonyo gave Lea a music box while inside one of the shops.

From Otaru, the next destination was an hour car ride to Sapporo City. Here, I ticked on the list the next movie location which was the Panasonic TV tower right in the heart of the city. From the viewing deck you get a glimpse of the city skyline, the beautiful sunset and below is the Oduri garden which was also featured in the movie.

The Sapporo TV tower was built in 1957 and stands at 147. meters high. The entrance fee for adults is 750 yen and 550 yen for group admission if more than 15 persons. In the movie, this is where Lea’s fiance proposed to her.

The Oduri park below is where the scene where Lea was touring a group of tourists and when a child almost fell into the fountain which was rescued by Tonyo. On this park is where she was also seen riding a Velo Taxi which is more like a bike taxi. Luckily, I got to meet and had a photo taken with the same guy who owned the bike appeared and appeared as passenger of Alessandra in the film.

On my fourth day in Hokkaido, still in Sapporo City, a short walk from the hotel led me to the old clock tower. In the movie, Lea toured a tourist couple and took a photo of them in front of it. The clock tower was originally constructed in 1878 as military drill hall for Sapporo Agricultural College. It is now open to the public as a historical museum and was designated as a national important cultural property in 1970.  The entrance to the museum is 200 yen and is open from 8:45am till 5pm.

Next stop was Hidamari Glass Pyramid in Moerenuma Park. It was a 47 minute car ride and from the road you can already see the biggest symbol of Moerenuma Park. A glass pyramid with a semblance of The Louvre Museum in France.

Hidamari Glass Pyramid which means sunny spot was designed by an American Japanese artist named Isamu Nogochi. This three-floor structure has a gallery, a restaurant and a souvenir shop. Parking and admission fee is free and open from 7AM till 9PM. In the movie Lea and Tonyo rode a bike around the park and ate lunch inside the pyramid.

After Moerenuma Park was another car ride to Fushimi shrine. A Shinto shrine located in the west-south of Sapporo in one of the high-end residential area of the city. In going up to the shrine you will pass through red orange torii gates. Lea and Tonyo were dancing together in this site in the movie.

Before going to the next movie location, a side trip to the original brewery of Sapporo beer was real treat for a beer lover like me.

To get to the top, you have to take the ropeway and another mini cable car ride. When you get to the observatory, in the center is the fortune bell where couples should ring the bell together for their love to flourish. The guy should hold the longer rope while the lady holds the shorter one.  Lea and Tonyo in the movie rang the bell together while wearing mascot costumes of a banana and a heart.

Here you can also find the love padlock handrail, it is believed to keep couples together forever if they write their names on the lock and locking it on the handrail.
The fees for this tourist spot is 1700 yen round trip for ropeway and mini cable car. It is open from 10AM till 10PM.

If you plan to visit Hokkaido during this time, make sure to bring with you winter coats as sometimes the temperature will drop to 10 degrees. On my first night it was 12 degrees.

And in case you plan to take just a short trip, it is best to limit the area to visit and to make a short stop on different sightseeing spots. Central Hokkaido is very convenient because spots are located close to each other and you should be able to enjoy walking in town, beautiful parks, restaurants, souvenir shops, museums and a lot more.  Also, make sure to bring with you enough cash since most museums and souvenir shops do not accept credit cards.

So get your passports and visas ready and book a trip for  Hokkaido.