Skip to content
WORLD
Terror in a busy street at the city center of Melbourne, Australia, Nov. 9. The 31, year-old suspect of Somali origin, who drove the pick-up truck that burst into flame and has stabbed 3 people and killing one of them was shot dead after confronting police officers.

According to Victoria Police Chief Graham Ashton, “We don’t believe there is an ongoing threat at this stage, but certainly we are treating it as a terrorism incident.”
Based on the witnesses accounts that prior to the stabbing, they heard a loud explosion then the vehicle burst into flame. The suspect went out of the vehicle and started stabbing people in the street with a knife.
The terrifying scene was over in minutes after the police shot the suspect who died after being rushed to the hospital. One of his victims also died in the hospital. 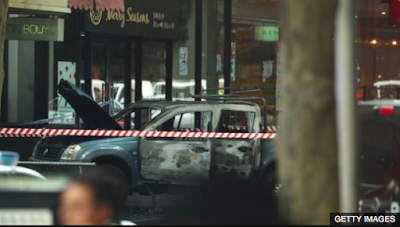