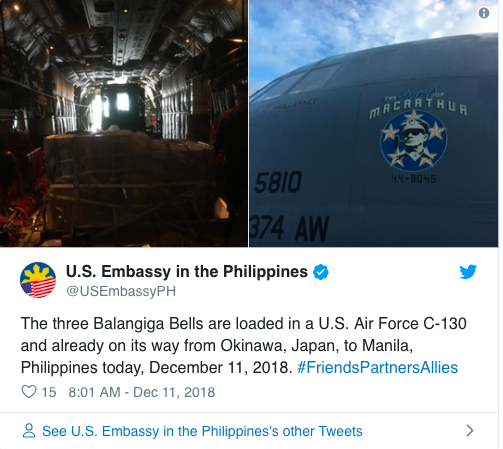 MANILA –  In a tweet by the US Embassy, said all three bells have been loaded to a US military plane in an American base in Okinawa, Japan and are on their way home to the Philippines, Tuesday, Dec. 11.
In Manila, the Philippine government personnel are doing preparations at Villamor Air Base in Pasay City, where the bells are scheduled to arrive.
President Rodrigo Duterte, who demanded the return of the Balangiga Bells during his State of the Nation Address in July 2017, will not be attending the welcome ceremony.
In 1901 during the Filipino-American war, the wartime bells were taken as war booty by invading American troops in Balangiga town, Eastern Samar.
The bells, which were used by Filipino troops to signal a sneak attack against invaders, have become a symbol of the Philippine resistance during that time.