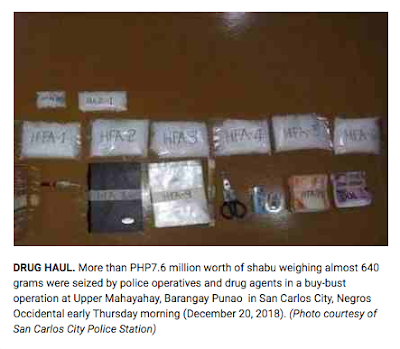 Two drug personalities were arrested in a buy-bust operation that yielded PHP7.674 million in suspected shabu in the mountainous area of Upper Mahayahay in San Carlos City, Negros Occidental early morning on Thursday.
A report of the Negros Occidental Police Provincial Office identified the suspects as Hanjie “Jack” Alquiza, 37, a high-value target, and Roden Zaraga, 41, a street level target.
Both are residents of Barangay Punao, where the operation around 12:55 a.m. was conducted by the drug enforcement team of San Carlos City Police Station – in coordination with the agents of Philippine Drug Enforcement Agency (PDEA)-Western Visayas.
Operatives seized six big, one medium, and one small sachets of suspected shabu weighing almost 640 grams from the suspects.Investigation showed that Alquiza has been jailed for an illegal drug case two years ago and was released only last month.Both suspects said they sourced the illegal drugs supply from Cebu, a claim being investigated by the police.
Huge volumes of shabu have been seized in the northern Negros city in the past months.
The largest haul was in August worth about PHP72 million and was recovered during an entrapment operation conducted by joint operatives of PDEA-Western Visayas and Central Visayas, and the San Carlos City Police in Barangay Palampas.
The seized illegal drugs, weighing about six kilograms, were packed in six transparent re-sealable plastic pouches. These were wrapped in paper and sealed with packing tape.(PNA)