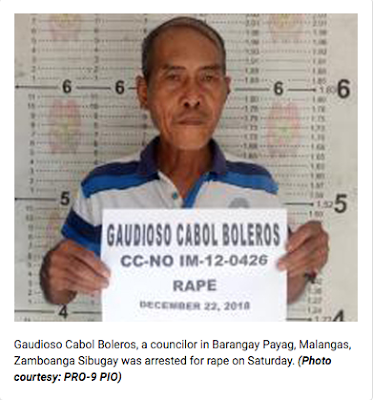 ZAMBOANGA CITY — A barangay councilor, tagged as the fourth most wanted person in the Zamboanga Sibugay town of Malangas, was arrested in a manhunt operation, police said Saturday.Gaudioso Boleros was arrested through a warrant of arrest in Barangay Payag, Malangas town, at about 7:30 a.m. Saturday, said Chief Supt. Emmanuel Luis Licup, Police Regional Office 9 (Zamboanga Peninsula) director.Licup said Boleros, 64, is an incumbent councilor in Barangay Payag. He was arrested after having been sighted in the area.Boleros has a standing warrant of arrest for rape with no recommended bail issued in February 2017 by a regional court in Imelda town, Zamboanga Sibugay. (PNA)