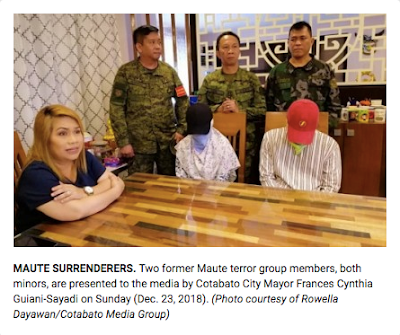 COTABATO CITY — Two self-confessed terrorists, both minors, along with their parents, voluntarily surrendered to Cotabato City Mayor Cynthia Guiani-Sayadi on Sunday.
Sayadi presented the duo, both Maguindanaons, to reporters in the presence of senior police and military officials at the city hall here but asked that they remain unidentified to protect them, considering both are minors.
Senior Supt. Rolly Octavio, city police director, said the two claimed they belonged to Dawlah Islamiyah, also known as Maute terror group, based in Lanao del Sur and trained on bomb-making and urban guerrilla attacks under the Ansar al-Khilafa Philippines (AKP) in Palimbang, Sultan Kudarat in 2015.
The confessed local Islamic State-inspired men were volunteered by their parents to Sayadi, who had been actively campaigning against the IS-linked group in the city.
“Both were not allowed to answer questions from the media, considering their young age,” Octavio said.
The two also confessed to authorities of their links to Cotabato City-based Maute group members, who carried out the bombing in Davao City on Sept. 2, 2016, which left 17 persons dead and about 60 others injured.
“Since they were minors, they were turned over to the city social welfare office,” Octavio said. Both the mayor and the police assured the parents of both surrenderers that they would be protected against possible reprisals from their former allies. (PNA)