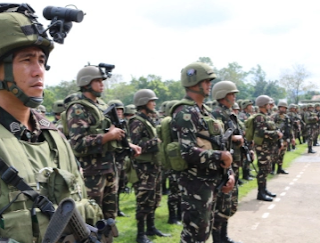 MANILA — The Philippine Army (PA) has stepped up security measures to prevent and contain any hostile actions that might be conducted by the Communist Party of the Philippines-New People’s Army (CPP-NPA) as it celebrates its 50th founding anniversary on Wednesday (December 26).
The NPA, the rebel group’s armed wing, is listed as a terrorist organization by the United States and European Union.
“The PA with its entire operational and tactical units have already stepped up its security measures to prevent and contain further possible enemy hostile actions,” Lt. Col. Louie Villanueva, Army spokesperson, said in a message to reporters Tuesday.
Despite the group’s attacks, Villanueva said the doors remain open for those who would like to surrender.
“Despite these unfortunate events wherein some of our peace defenders got wounded, while some offered their lives, the Army remains steadfast and determined to continue its task of securing and providing tranquility so that the people will feel and enjoy the spirit of Christmas season,” he said.
Villanueva said the CPP-NPA marks their anniversary with violence which he said is “in contrast the peace agenda that they are trying to sell to the government and the people”.
“The series of violent incidents perpetrated by CTs (communist terrorists are clear manifestations of their insincerity about the peace process and clear disregard to the welfare of the people. Instead of contributing to serenity to give way for the Christmas celebration, which every Filipinos dearly cherish and awaits, in contrast their offerings are malevolent,” he added. (PNA)