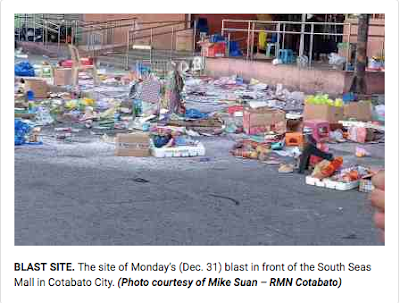 A powerful blast that ripped into the facade of a mall here killed two persons and wounded scores of others around 2 p.m. Monday (December 31), police said.The bomb, believed to be from an improvised explosive device (IED), went off in front of the South Seas Mall along the busy Don Rufino Alonzo Avenue, where people are in a shopping rush on New Year’s eve.Two of the victims, Jonathan Tasic Torrebiano and Meriam Kali Ulama, were declared dead on arrival at the Cotabato Regional and Medical Center (CRMC).Supt. Romeo Galgo Jr., deputy police director, said the blast at the mall’s baggage counter area was powerful enough to injure even the roadside vendors and motorists passing along the street.Chief Insp. Ruel Zafra said a second bomb found at the baggage counter on the second floor was disarmed by military bomb disposal experts.Galgo said bomb experts were convinced that the IED was similar to those set off in other areas of Maguindanao in the past.“We have possible suspects but we are still investigating; we are reviewing the CCTV of South Seas Mall,” Galgo said.The blast came while the mall entrance was busy during the shopping rush. Vendors of firecrackers, hornpipes (tororot), toys and fruits were conducting business just outside the mall when the blast occurred.Galgo identified some of the injured individuals as Aida Dalandas, Bai Sandra Ayunan, Karen Diazon, Muhamidin Kahar, Nasrin Anding, Rayan Madali, Samanudin Rumomba, Aida Mukabo, Prisha Mae Amestoso, Muhalidin Maninto, and Abdul Manan. They are being treated at the Cotabato Regional and Medical Center here.Also rushed to other hospitals were Sedik Kutin, Hamida Sulaiman, Joey Api, Aida Balandag, Manisa Torres, Ayanan Biruar, Tarhata Biruar, Noryn Biruar, Norhamin Nakan, Denise Torres, Sarah Jane Esmael, Ronel Maskuban, Alnait Mukado, Mariam Cali, Naida Sampurna, Mylove Natano, and Ibrahim Marsuban.Cotabato City Mayor Cynthia Guiani-Sayadi condemned the bombing and called on residents to stand up against terrorism.“This is not just another terroristic act but an act against humanity. I cannot fathom how such evil exists in this time of merrymaking of our fellow Cotabateños,” Sayadi said.“No matter how you threaten us, the people of Cotabato are resilient and we are stronger than how you think we are,” she added.A lockdown was immediately implemented in the entire city, with soldiers and policemen preventing the entry and exit of all kinds of vehicles, except those of the military and the police. It was not clear when the lockdown will be lifted.The city entrance from the northern and southern portions of the city remained closed as of 4:30 p.m. The lockdown started at 2 p.m. (PNA)