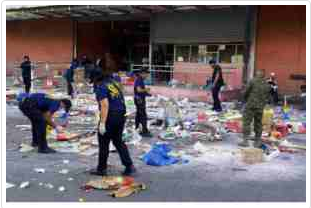 “Let us not allow this incident to discourage us to unite and act as one in our collective aspiration to achieve just and enduring peace not just in Mindanao, but in the whole country,” Galvez said in a statement Tuesday.
Galvez reiterated the need to continue working for peace, as he expressed condolences to the families of the victims of the bomb attack and offered prayers for the recovery of the wounded.
He also urged the public not to be “swayed to spread unfounded speculations relating to the incident”.
The former military chief said Monday’s incident is an isolated case and security forces are on top of the situation.
“Let’s trust that the perpetrators will be brought to justice and that acts like this will be stopped,” he said.
“While we strongly condemn this treacherous and cowardly attack against humanity and the peace-loving people of Cotabato City, we also pray that the perpetrators find remorse for their actions which is against the sacredness of life, and our beliefs as Christians, Muslims and Indigenous Peoples of Mindanao,” he said. (PNA)