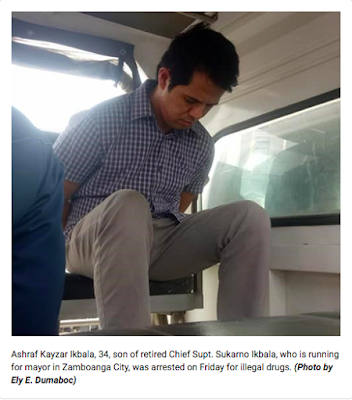 ZAMBOANGA CITY–A son of a mayoralty candidate yielded some PHP100,000 worth of illegal drugs when arrested in a manhunt operation in this city, the police reported Saturday.Chief Insp. Helen Galvez, Police Regional Office-9 (PRO-9) information officer, identified the suspect as Ashraf Kayzar Ikbala, 34, who was arrested at about 2:30 p.m. Friday in Aurora Village Subdivision, Barangay Tumaga.Ikbala is the son of retired Chief Supt. Sukarno Ikabala, who is running for mayor in this city.Galvez said the younger Ikbala’s arrest was connected to two illegal drugs charges last year, in which a warrant of arrest was issued by Regional Trial Court (RTC) Branch 16 Judge Catherine Fabian.No bail bond was recommended for one of the charges, while the court set a PHP200,000 bail bond for the other case.Galvez said the arresting team conducted a preventive search and recovered from the suspect’s possession some PHP100,000 worth of suspected shabu, packed in seven heat-sealed transparent plastic sachets. (PNA)