In its continuing effort to raise pride in Filipino cuisine, Plantation Bay just launched Philippine Voyager, a 7-course tasting menu which takes the diner on an exciting culinary journey around the country, courtesy of Executive Chef Lee Ramas and the hotel’s top management.

Like all of Philippine cooking, the tasting menu combines diverse cultural influences. At the same time, instead of just re-hashing traditional favorites, it introduces pleasant surprises in every course. 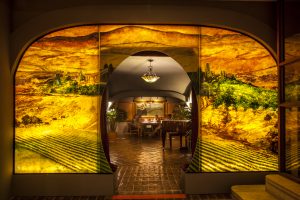 Start with Manny’s Ceviche, which is of course a kind of kinilaw. Served on half shells, it comprises thin-sliced lapu-lapu sashimi, native herbed vinegar, chilis, and a hint of tropical fruit. Don’t waste time with a fork; just bring the shells to your mouth and suck in the delectable interplay of sour, spicy, salty, and umami. Several visitors from the US and Latin America have already declared it’s the best version of ceviche they’ve ever had.

Next course is Adobo, but with a Twist: the Adobo (chicken and pork, cooked slow for hours to achieve maximum tenderness and flavor) is minced and served on deep-fried home-made bread! The combination is uniquely satisfying. Again, this is finger food: just pick up the mini-squares and pop them into your mouth.

As a counterpoint to the Adobo, Plantation Bay serves a small cup of Traditional Arroz Caldo, made the old way, starting with raw rice grains, reduced chicken broth, and seasonings. It used to be said that the best Arroz Caldo in the country was served in the Business Class Lounge of a certain airline. Plantation Bay’s version easily surpasses that.

Fresh Lumpia follows, but instead of a delicate lumpia wrapper, it comes in a cone-shaped taco eaten with your hand to add to the sensory enjoyment of eating. And instead of the usual Tagalog-style sweet peanut sauce, you get Cebu-style cream sauce, which is subtly subversive – if you get used to it, you might never settle for the usual sauce again.

The fifth savory course is Kare-Kare made with beef shank and XO sauce (home-made). Plantation Bay’s Resident Shareholder Manny Gonzalez explains why: He wants to promote Kare-Kare as the Philippine National Dish. “It is one of the most distinctive beef dishes in the world; in all my travels, I’ve never encountered anything even similar; yet it is a treat to almost every palate. Like Adobo, it is widely popular, but it has no pork and hence does not offend a large segment of our population. Beef shank is more reliable and more forgiving to less-skilled cooks than oxtail, so almost anyone can make it, with less effort than the traditional recipe.” 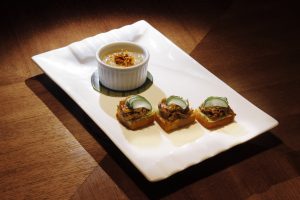 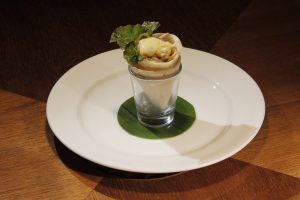 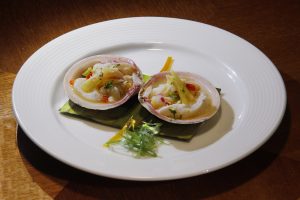 And why exactly do we need a National Dish? To raise pride in our cultural identity, just as the French take pride in foie gras and the Vietnamese take pride in glass noodles. Adobo and lechon are just not distinctive enough to qualify, as the past 70 years and repeated attempts to launch Filipino restaurants abroad have shown. Anecdotally, Manny points out that one of the most-hyped of these restaurants, in New York, has survived only by becoming half-Korean (down-market Korean, at that) and casting aside all pretensions to fine Filipino cuisine.

Back to the Kare-Kare. It’s served pre-piled on three ceramic spoons (each a large mouthful). The XO sauce again was chosen for accessibility; bagoong is not (yet) ready for a mass market; so instead of flogging a losing horse, Plantation Bay opted for XO (made in-house), which already appeals to an international audience. (And in case you’re wondering, Plantation Bay also serves “real” Kare-Kare a la carte, and claims it’s the best in the world; this one comes with bagoong and uses meaty US oxtail and made-from-scratch peanut sauce.) 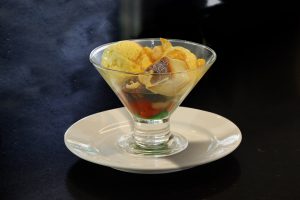 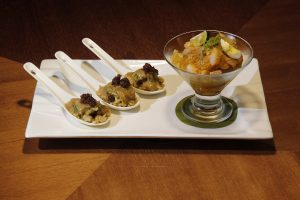 The final savory course is a sleeper. What can you possibly do to make Pansit Malabon outstanding? Well, try it and find out – crunchy, fat, rice noodles, chicharon flakes, and an intense sauce that will make you wish you could buy a bilao, as used to be the case with a well-known chain before they discontinued their Pancit Palabok (essentially the same, but with a finer noodle).

After all that, you’re ready for something sweet, and what could be more typically Filipino than Halo-Halo? But even this is super-charged – no shaved ice, and instead Plantation Bay’s extra-creamy Home-Made Langka Ice Cream, and the most Halo-Halo tasting Halo-Halo ever.

Some Michelin-starred restaurants abroad offer tasting menus that run to 12 to 20 courses, and offer dishes that are “interesting” but just don’t appeal to many people (we won’t mention their names). Others,  like Le Bernardin (New York) and Quince (San Francisco) opt for shorter menus that lean very much to the high end. Plantation Bay’s Philippine Voyager celebrates good Filipino cooking while keeping the food soul-satisfying and meaningful to a broad audience. 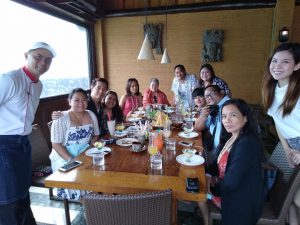 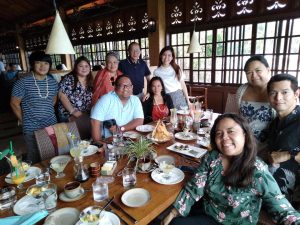