Tulfo wrote in his opinion column last March 7 on the circumstances behind President Rodrigo Duterte’s raising of the hand of both politicians during the PDP-Laban political rally in Cebu last Feb. 23. 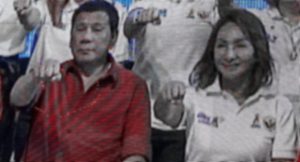 He then mentioned about Cong. Gwen Garcia and Rama, the former Cebu City Mayor. After raising her hand, Garcia who is running against Vice Gov. Agnes Magpale, was publicly endorsed by Pres. Duterte in the rally held at the Plaza Indepedencia. “Grupo man mi, ako gyud ning suportahan si (We are a group, I will really support) Gwen,” the President said then over the public address system.

But Tulfo pointed out that Garcia had a pending case in the Balili land deal where Garcia had even been ordered dismissed from the (government) service. The Comelec ruled however Garcia could still run for the May 13 elections as the decision is not yet final and executory.

“Former Cebu governor Gwen Garcia, on the other hand, is facing graft charges, and was dismissed from service in February 2018 by the Office of the Ombudsman. The Balili scandal, where the Cebu government bought land submerged underwater as a dumpsite for coal ash, was a situation that eventually got her dismissed from service. Succeeding cases filed against her for backfilling parts of the property did her in,” Tulfo wrote.

In the case of Rama, the hard-hitting opinion columnist mentioned about the inclusion of the former Cebu City Mayor in the narco-list. “Former Cebu City mayor Mike Rama was mentioned by Digong as a part of the narco-list — a list of people in government who are possible protectors and users,” Tulfo said. Rama earlier explained that the raising of his hand is an “exoneration” from the President himself even as an updated narco-list is still yet to be released.

Tulfo asked “So, why is it that two particular people in Cebu had their hands raised by Digong, and yet their reputations could stain Digong’s?,” adding, “But what made these two officials “worthy” of Duterte’s support, by raising their hands? Is it because their political party, PDP-Laban, supported Duterte in Cebu during the last presidential elections? Their support in the presidential elections will never be forgotten. However, their questionable actions are also unforgettable. What these people do not understand is that when Digong raises a hand, it comes with the understanding that it is his way or the highway. If they cannot keep the unspoken promise to serve the people well, then the hand that raised theirs will also be the one that will bury them.”

To which he concluded, “The President’s advisers should have warned, nay reminded, him about Garcia and Rama.”

Who then are they, the advisers of Pres. Duterte? In the meantime, for the record, Gwen Garcia for Cebu Governor and Rama as Cebu City Vice Mayor, both there hands were raised by Pres. Duterte as PDP-Laban bets,  the act was a tacit endorsement.