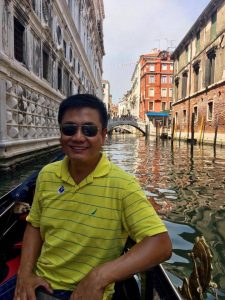 In a way, we cannot escape from the invading Chinese. I, myself, have some Chinoy blood in me, what with my chinky eyes and natural fair skin complexion devoid of glutathione. Filipinos in America would never identify me as a Filipino until I speak in Tagalog. They think I’m either a Chinese, a Korean or a Japanese, but seldom a Pinoy. Even in the Philippines, I can pass off as a Chinese, until I order in Tagalog.

I remember when we were young in the 70s when native Filipinos looked down on the Chinese. We used to call them “intsik beho!”, a derogatory profiling of Mainland Chinese immigrants when the peso was P3 to a US$1 and we had diminutive comedian Chiquito making fun of them in pidjin Tagalog-Chinese as the politically-incorrect “Mister Wong.” And he was a hit. Now that they are gazillionaires, it’s the return of the comeback!

They are not only pissing on our sovereignty and making puppets of our leaders, but now they are also taking away our jobs, as if it wasn’t enough that they already control the economy.

It’s a testament to how we failed as a nation. If not for the billions of dollars some 12 million overseas Filipinos are remitting annually, the Philippines could have been a failed state.

Instead of keeping the Philippines as an economic powerhouse like in the 60s, when China and the Chinese were poor as a rat, the succession of political and economic leaders plundered the Philippines to a point where more than a quarter of our population lives in, as Ted Failon would would call it, “kumunoy ng kahirapan.” And there is no safety net or economic opportunites in sight to pull them out.

Even Dr. Jose Rizal can’t inspire a nation to rise up from the brutality and corruption of Spanish rule in the Philippines, and in fact, we adopted them instead to modern Philippine society, this time with impunity and total disregard of laws.

Instead of building factories to keep us as a manufacturing force and a top exporter like Vietnam and Thailand, we’ve built megamalls and sent our best workers to work abroad. We can’t even plant rice to self-sufficiency because most of our farmers have already left their rice fields to till in the hot deserts of the Middle East, just to come back to their barrios now littered with subdivisions with houses built on hollow blocks with tiled roof and glass windows, making them suffocatingly hot like an oven when the scorching summer heat hits max at noontime.

The nipa hut gave way to these concrete edifices of their sacrifices as an OFW, and so is our ability to grow our own staple abundantly, enough so we don’t have to import from these two neighbors whose rice production program was basically learned from us, at IRRI in Los Banos, Laguna.

Thailand, which was a honky tonk back in the 1960s is now progressively ahead of us by 20 years. Bangkok, which had traffic worse than EDSA, is now a spaghetti of civil work projects transitioning traffic in fluid flow. The Bangkok International Airport is swanky and has none of the welcoming mobs and stinking toilets at NAIA.

And now we complain about the Chinese, once our Chimays now our overlords. And as vengeful as we are as a people, I mean, just count the number of casualties in any given election cycle, some of us are urging fellow Filipinos to boycott products “Made In China” like iPhones and Nikes for a “resbak!”.

It’s a symbolic appeal even if the proponents may think it is even possible that Filipinos would refrain from patronizing the Chinese or their products. Asking Filipinos to boycott Chinese products is like telling them to stop eating rice, which, by the way, tons of it also come from China.

Although altruistic in thoughts, asking Filipinos to stop buying Chinese products is like telling them to stop from going to malls, you know, those air-conditioned monstrosities that give us solace from the scorching heat and humidity of the dry season.

As if the Chinese has not already invaded us. They are as ubiquitous as the jeepneys and corrupt public servants. Many of us, even to a tiny drop of blood, must have some Chinese ancestry. It won’t be long before our Malay bloodline is fully diluted with Chinese DNA that we won’t need to bleach our skin to whiten our brown complexion.

They have taken a hold of the Philippine economy and a major influence on politics. From the smallest and poorest barrios to big-time cities with big-time money, they are the titans of industry. The only two “Filipinos” – the late Henry Sy and Lucio Tan – in the Forbes World’s Billionaires list are of Chinese descent who’ve allegedly squirreled away some of the money they made in the Philippines to invest in the Mainland where they were born and raised before immigrating and making it big in the Philippines.

We import more than we export to China, which is the Philippines’ third largest trading partner, and home to some 160,000 OFWs in its two territories, Hong Kong and Macau. Our agricultural sector has nothing to show for because of cheap fruits and vegetables smuggled from China flooding the local market. From now on, Many Pinol will be known as the agriculture secretary who killed the local rice industry by allowing unbridled  importation of  cheap but high-quality rice under his term.

From cradle to grave, we are either beholden to a loan to a Chinese or have used products made in China. Like for shelter; where do you buy your nails and GI sheets to build or fix a house but from the corner hardware store owned by a Chinese? For almost everything that we eat or use, somehow there could be an ingredient or a raw material in there – some of them toxic or high in MSG – that we import from China.

But then, who can refuse a steaming hot Beef Mami!