Come to think of it, the etymology of “trapo” could might as well come from the ubiquitous election campaign t-shirts flooding the campaign trail.

Since many of these tees are imported from China, the origin of all cheap if bought in bulk like at Costco, their cotton is as thin as the accomplishments of those candidates who’ve promised us the sun and the moon while on stage singing and dancing, as if to smoke-screen his empty promises. Otherwise, the Philippines would not have been a basket case of more than a quarter of its population living below the poverty line while 12 million of us toil abroad.

When new, the usually dyed t-shirt in yellow or red or blue or in LGBTQS rainbows projects such colorful image and slogan of the candidates. So fresh and appealing, it smells of paint and thinner like it was off the presses. With hopes fanned by these rah-rah speeches and fueled by grease and cholesterol in a Jollibee lunchbox, the T-shirt is brought home as a memento of good things to come. And depending on how much money is enclosed, the candidate on the shirt could get the vote.

When elected, some would try to to do their job, until the corrupt realities of Philippine politics run them aground and become useless mouthpieces of campaign promises they cannot fulfill. They, too, are corrupted by the vested interests that elected them and the news ones trying to entrench themselves. And many of those elected, reelectionists or newcomers, just want to rob us blind.

Just like the first time you wash the T-shirt, usually rolled with some folded money and placed on top of a Jollibee lunchbox, you’d notice immediately how it shrinks from Large to Medium as its colors start to fade and the letters start falling off. Until it becomes too small and it’s colors faded to charcoal gray, almost blackish. That’s the time it’s become a “basahan” or a “trapo,” all-learned from the trappings of a traditional politician who is now as corrupt and disgusting like a basahan.

Power corrupts, and absolute power corrupts absolutely. As in, in-your-face plundering of voters who keep electing or re-electing them, elections after elections. And as it’s always the case, whenever a politician gets elected, he never wants to leave no more even if he has to campaign from jail. Just to get back, you can always use the soiled T-shirt to wipe your ass, preferably where the mouth of the “trapo” on the tee kisses your a-hole, then throw it away to save you precious water.

Hopefully, the next shirt won’t turn into a basahan as fast as the last trapo. Hope springs eternal. To a Filipino, hope is all he has.  And a trapo. 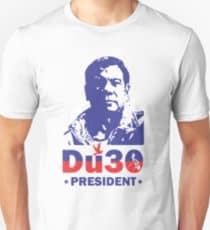 Exciting December boxing affairs; 3 events in span of one week!

Of Lockdowns and Elections!