Former Cebu based broadcaster and lawyer Juril Patino is now the subject of arrest by lawmen. Judge Marlon Jay Moneva of the Cebu City Regional Trial Court (RTC) branch 20 issued his warrant of arrest for rape. Moneva recommended no bail for Patino, erstwhile anchorman/commentator of Brigada News FM Cebu. “YOU ARE HEREBY COMMANDED TO ARREST JURIL B. PATINO who is said to be found at Block 6, Miramonte Subd., Pit-os, Talamban, Cebu City and who has been charged before me with the Offense of Rape Under Art. 266-A Par. 1 and deliver them (sic) to the nearest station and jail,” a portion of the Arrest Warrant dated Feb. 14, 2019 stated.

Patino’s case happened in July 2017 after a 13 year-old minor complained that the lawyer abused her inside his car. The alleged incident took placed in Zamora St., Barangay Parian after the lawyer invited her to ride his car after they met by chance in the radio station where the lawyer used to work. Patino denied the charges however but the Cebu City Prosecutors Office found prima facie evidence against him which elevated it to the court. The victim then looked for her mother who was the laundrywoman of a colleague of Patino and since her mother was not around, the victim talked to Patino instead.

The victim claimed that she merely asked the lawyer-broadcaster for a jeepney fare but Patino instead offered to join him in his car and in the process allegedly raped her while inside. Prosecutor Alex Gabud found evidence to charge Patiño with rape before the court. “The testimony of the minor victim coupled with the result of her medical examination, which shows positive result of laceration of the hymen, prevails over Juril’s,” a part of Gabud’s resolution read. Patino according to sources is still in the country. 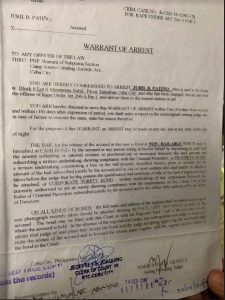