The document dated April 15, 2019, was signed by Dr. Saga Mabaning, chief of the Judicial Records Division of the Comelec Central Office in Intramuros, Manila. Mabaning acted on the requests of Alexander Dimapunong and H. Rasul Abangon, said to be Muslim leaders in Cebu City and Lapu-Lapu City, regarding the COMELEC EN BANC Minute Resolution No. 18-1182 (in the matter of the Non-Use of the amended Certificate of Candidacy (COC) in connection with the May 13, 2019 National and Local Election (NLE)” where he mentioned page 2 of the 4 page document.

“INCIDENTALLY, Item No. 4 of page 2 is the name JUNARD QUIRANTE CHAN, a mayoralty candidate of Cebu Region Vll, as one among those “disqualified candidate” who are not to be voted under this COMELEC EN BANC Resolution as far as the personal understanding of the undersigned is concerned in his official capacity,” a portion of Mabaning’s certification reads. 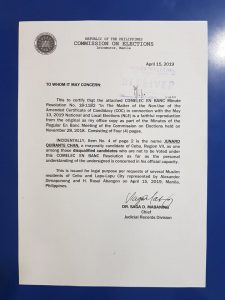 Atty. Layson confirmed that he also had a copy of Mabaning’s document as well as the COMELEC EN BANC Minute Resolution No. 18-1182 but he can not just simply act by himself to consider Chan as disqualified. First, he will have to check the veracity of his copy of the en banc resolution as the document was just provided to him by a private person.

As to the Mabaning purportedly signed document, Layson said he also needs q guidance from their Manila Central office. “We have to ask guidance and enlightenment from our central office regarding this.

This is only a certificate or a letter that does not bind me,” Layson explained. He said Chan’s name is already included in the official ballots that would be used in the forthcoming May 13 polls and unless so directed by their law department and national office, he can not act against the candidacy of Chan.

Layson said not even him could rule that the votes for Chan would be stray votes since he is just one of the members of the city board of canvassers. The City Board of Canvassers is chaired by Layson with the City Prosecutor and City Division Schools Superintendent as members.

Earlier, mayoralty aspirant Rolando Patalinjug has asked Chan that they join forces in view of the “disqualification matter”, admitting that it is the sure way to beat former Mayor Arturo Radaza.

Mudapig na lang siya sa among grupo ug iyang mga supporter arun mudaug gyud ta,” Patalinjug said. The disqualification issue against Chan, the incumbent Pajo barangay Captain stemmed from his alleged submission of an old COC that did not include item no. 22 which states a question to a candidate on having been found liable of an offense with a penalty of perpetual disqualification to hold public office.

Since Chan allegedly did not submit the correct CoC, it made him as among the 53 candidates in the entire country described as “BE DEEMED NOT FILED” their CoC. Comelec Law Director Ma. Norina Tangaro-Casingal recommended the minute resolution which was approved by the COMELEC EN BANC.

“Open-ended kasi eh di ko masabi na ano na he is not a candidate na ano in this coming elections nakalagay lang deemed not filed so kailangan pang i-implement ito, this has to be implemented by the law department,” Layson further explained.

Chan also filed his candidacy during the time yet of the predecessor of Layson, Atty. Ann Janette Lamban, the best person who can confirm the type of COC that Chan has submitted. Lamban is now assigned to Bacolod City.