Skip to content
By Tonton Alcos Antogop
TALISAY CITY, PHILIPPINES- An ex-United States (U.S.) marine was killed by cops after he earlier killed his stepson and a village chief over a property ownership disagreement last Thursday here. A spot report reaching the Central Visayas Regional Police Headquarters identified the assailant as Segundino “Dean” Torrefranca who killed his stepson Jed Ybanez, 30, and Lawaan 3 Barangay Captain Jimmy Bartelic, 59. Torrefranca allegedly shot Ybanez and Bartelic past 9am as they were trying to enter their house in Sitio Bliss, Lawaan 3 to look for a vault which was left by Torrefranca’s wife, former Lawaan 3 barangay chief Delia Ybanez- Torrefranca.
Delia died a month ago and left a car and other properties which caused the conflict between her son from a previous marriage and her husband. Prior to the shooting, Torrefranca and Ybanez met in the barangay hall to possibly settle their differences with Bartelic as the mediator to no avail. Torrefranca left ahead and when Ybanez and Bartelic were approaching his house to possibly continue their discussion, he shot on the two hitting them both.
Wounded, Ybanez and Bartelic ran but Torrefranca pursued and finished them off. The Talisay police led by Lt. Colonel Marlu Conag along with the Special Weapons and Tactics (SWAT) team rushed to the scene but Torrefranca fired on them too. Torrefranca later burned their two-story house to make it hard for the police to spot him but as firefighters also arrived he was seen by one of the sniper cops and hit him.
Central Visayas police regional director Brig. Gen. Debold Sinas also arrived at the scene to supervise the operations, where SWAT teams from Cebu City and Mandaue City also responded. The police were able to recover the AK 47 that Torrefranca had used. He wore a vest when found in the burned house.  Investigators are checking reports that the former U.S. marine has been hooked to gambling.
Photos by Leah Villagorda 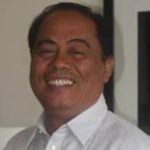