Richmar Cabañero, 15, a son of a taxi driver from Barangay Camputhaw was spotted by Sinas as the police official made rounds in Cebu public schools today for the first day of class for the school year 2019-2020.

The teenager said the gesture of Sinas inspired him, telling reporters that incidentally, he wants to be a policeman someday. “I am happy and thankful to him,” Richmar said in Cebuano, adding, his scouting is part of his preparation, “I want to be a policeman to have training.”

He is an Outdoorsman in the Senior Scouts of ANS, one of the schools that Sinas visited on his way to Talisay City where he will also check the Talisay City National High School.

The teener who said that he got his name from the combination of his parent’s names, Richel and Maribeth, confessed that because of his father’s limited income as a taxi driver, he had his scouting uniform in 2016 yet from his earnings in doing errands for neighbors.

Sinas chose him after the police officer noticed that the teenager was very enthusiastic in assisting his fellow ANS students even if the color of his red scout shirt is faded and the hemline of his khaki pants is already short for him.

The hemline already hanged above his shoes making his socks very visible which also got the attention of PRO-7 spox Lt. Col. Ma. Aurora Rayos whom Sinas instructed to take charge of the boy’s needs.

The PRO-7 headquarters had earlier chose ANS as their Brigada Eskwela adopted school, it improved the school’s comfort rooms, cleaned their manhole and repaired their sanitation and drinking area. 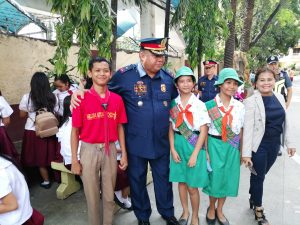