DON CARLOS, BUKIDNON—The University of the Visayas (UV) Green Lancers opened their campaign on a bright note in the 8th Felix Manzano National Inter-Collegiate basketball tournament as they bucked a heavy challenge from the San Sebastian College-Recoletos senior high squad yesterday with a 90-80 victory at the Don Carlos Bukidnon Astrodome here.

In the second game, the Agro-Industrial College Foundation of the Philippines went toe-to-toe against the Holy Cross College of Davao Crusaders before escaping with a 105-102 victory over the latter. With their separate victories, the 2018 Cebu Schools Athletic Federation (Cesafi) men’s basketball champions Green Lancers and the Agro-Industrial cagers of Davao now share the temporary driver’s seat in this pocket tournament, which will run up to June 18.

In the opening game, UV’s flashy point guard Sheldon Gahi and Fil-Foreign player Lassina Coulibaly paved the way for the Green Lancers’ opening day win in the tournament being held in line with the celebration of the 2019 Araw ng Don Carlos celebration as both banged in 22 markers apiece to lead all scorers of UV coach Junil Maglasang’s boys.

Also firing up on all cylinders for UV were Jancork Cabahug, who registered 16 points including four treys and Melvin Butohan, who chipped in another 16 baskets. The losing San Sebastian squad was headed by Milo Janao, who scored 18 baskets and the tandem of Regg Gabat and Dave Balo, who conked in 10 points apiece.

The Green Lancers drew first blood in the match as they went out with all guns ablaze with Gahi leading the way as they took an early 11-0 lead in the opening quarter before Gabat and Balo exploded to cut down UV’s edge to just six points, 20-14, at the end of the period. The SSC-R developmental quintet briefly took the lead in the second phase, 35-32, before UV retaliated and took a slim 41-38 halftime edge.

UV and SSC took turns in taking the lead in the third canto before Balo scored two consecutive baskets to give SSC a 61-57 lead entering the final period. Then last time SSC got a taste of the driver’s seat was in the last five minutes of the game, 69-68, before Cabahug, Coulibaly and the rest of the Green Lancers took turns in scorching the basket to give UV the victory. 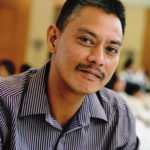