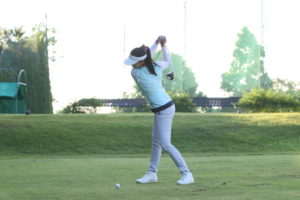 This year’s edition of the Business in Golf Tournament, an annual event organized by the Cebu Chamber of Commerce and Industry tees off on June 20 at the par-72 Alta Vista Golf and Country Club.  The event presented by Cebu Landmaster Inc. and PLDT is held as part of the Cebu Business Month celebration, a flagship program of the CCCI.

A Harley Davidson motorcycle is at stake for an ace in the tournament along with a six-night stay at Plantation Bay and a roundtrip ticket to Korea from Air Busan.  The tournament, which is also backed by Aboitiz Construction and Philippine Span Asia Carrier Corp. is a four-man team event where each team is composed of two best-ball pairs.  This means that two members of a team will play on the same flight and on each hole, the better score among the two players will count for the total.  To get the team score, the total of the two pairs will be added.  The Modified Stableford Scoring System will be used applying the June handicap.

Players who do not have a handicap in the Unified National Handicapping System (UNHS) will play with an adjusted handicap if he or she submits a certification from their club. Those without any handicap will play with zero.  At stake in the tournament will be trophies and merchandise for the members of the top three teams.  There will also be prizes for the overall lowest net and the player with the longest drive.  The chamber representative or alternate with the bet score will also be declared as the golfer of the year.  Entry fee per team is pegged at P12,000, which  covers the tournament fee, cart and insurance. (PR)