BAYUGAN City, Agusan del Sur — The Vincare/Pharma Southwestern University Cobras were on target from the start to finish to conquer the Mair Construction-backed University of Cebu Webmasters in a high-octane 89-86 explosive game to get the chance to make the championship game of the Mayor Kim Lope A. Asis Mayor’s Cup Invitational Basketball Tournament 2019 Friday, June 28, evening.

The Cobras entry to the finals was then completed by the victory of ARQ Builders/Far Eastern University Tamaraws over the veteran-laden Madyaw Construction/Valenzuela Classic, 81-73, in the main game. The loss of Valenzuela created a three-way log jam for the no.2 finish after the Classic, the Cobras and the Webmasters ended with a 2-2 win-loss record.

After the computation of the goal difference tiebreaker method, SWU-Phinma got the highest tie breaker points with positive 1, Valenzuela had zero and UC had the lowest with negative 1. The computation was based on SWU’s 3-point win (89-86) over UC and the 2-point (85-87) loss to Valenzuela. The Classic meanwhile won beat the Cobras by two (87-85) and lost to the Webmasters also by 2 points (81-83).

The UC-SWU game was actually a fast-paced game highlighted by outstanding 3-point shooting for both teams. The game accounted for a total of 20 3-pointers with the Cobras sinking 13. And of those 13 triples, Gerald Fernandez who was frequently left wide open nailed six. The last one was a dagger from the left wing that gave the SWU a 5-point breather 84-79 at the 4:19 mark of the fourth period.

The Cobras started on an 11-0 run but quickly saw it trimmed down to 4, 16-12, as Shane Menina, who sit-out on UC’s win over Valenzuela Classic made his presence felt and scored six of the Webmasters 12-5 blitz. It was at this point when coach Mike Reyes fielded Fernandez who right away sank two triples, as he scored the last eight points for SWU against the 10 of UC to end the first quarter with the Cobras leading 24-22.

Fernandez then scored two triples of his 11 points in the second period as the Cobras took a 44-37 lead at the halftime break. UC then had their own three-point binge with John Jabello sinking two and Paul Galinato and Tristan Albina made one each while Sierra Leonean center Tosh Sesay scored 11 of the Webmasters 21-17 bash to log its biggest lead at 68-61. However,  Senegalese do-it-all center Lamine Thiam made his own triple and Dyll Roncal scored on a put-back to inch the Cobras within 66-68 at the end of the third period.

SWU seemed ready to roll over when Thiam induced second wind to the Cobras with a left-handed slam that ignited 16-8 spurt as the Vincare Pharma took the lead for good after posting an 84- 79 lead at the final 4:19 of the game. Fernandez who averaged 7.0 points on the past three games scored the team high 29 points, Thiam added 22 and Shaquille Imperial finished with 15 for SWU while Menina’s game-high 31 points, Sesay’s 21 and Jabello’s 18 went for naught as UC failed to make a back-to-back appearance to the finals.

In the main game, Kimlee Bayquin and Emman Ojoula made 10 and 9 points respectively in the second half to help the ARQ Builders/FEU Tamaraws sweep all of its elimination round games. Valenzuela looked to get an outright slot to the finals when they dominated the first half with veteran slot-man Mark Andaya eating the defense of Patrick Tchuente to his convenience.

However, coach Nash Racela sat Tchuente in the second half and fielded the wide-bodied Emman Ojoula who eventually dominated Andaya and the shaded lane as the Tamaraws made a ran-away in the final half.

Rey Bienes and Wendel Comboy scored 12 points each with nine more players from the  ARQ Builders/FEU team scored at least two points for the victory while Jemar Guimpayan scored the game-high 17 points, Paolo Hubalde added 11 and Andaya and Hans Thiele chipped in 10 points each for the MPBL squad./ RCM 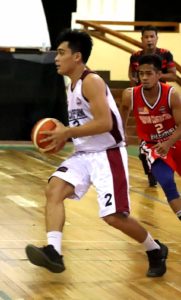 Former Senior Sportswriter of SunStar Cebu. Boxing and basketball analyst with varied experience in radio broadcasting and motocross events annotating. Also an organizer of various sporting events, and currently a PSC consultant for media affairs for the Visayas.