CEBU CITY, Philippines- Pampering them and feeding them afterward feels like heaven to the street children in Cebu today. “Pasalamat gyud ko Sir, nindot kaayo ang gibati nako karun,” an 11 year-old street vagabond from Talisay City told iNews.Ph in an interview. For Neneng, 10, from the Cebu City pier area to bath on a shower with a nice smelling shampoo was like heaven.

“Lami-a gyud lagi, humot kaayo ko karun. Unya gipakaon pa gyud mi. Gihatagan ug gift dayon, lami-a gyud,” she said to this writer in near tears. The two were just part of the 200 street children from Cebu City, Talisay, Mandaue and Lapu-Lapu City that were pre-selected to join the “Kalingawan alang sa Libud Suroy (Fun for the Street Children)” that was organized by Police Regional Director Brig. Gen. Debold Sinas as part of the celebration of the Police Community Relations (PCR) month for PRO7.

The activity was in coordination with the Office of the Presidential Assistant for the Visayas (OPAV) and the Dilaab Foundation of Fr. Carmelo Diola. Some of the children and their parents wrote personally to Sinas to express their gratitude to the police official. “Dear Sir Debold, thank you Sir pag-love namo,” a certain Chareb wrote to Sinas which visibly touched the police General as he read it aloud. For Father Diola, the activity was significant because it proved that many things could be done if the police and the church would help each other.

Diola brought along the foundation’s mobile shower truck called “Sakyanan sa Kalooy” where there are shower cubicles that were attached. The truck also have barbers aboard where children can have their hair-cut. “Kung magkakuyog ang kapolisan ug simbahan daghan kaayo tag mahimo so mao nay message ani,” Diola said who like Sinas, also emphasized the importance of caring for the children.

Sinas said they hope to bring inspiration to the street children so that they will be productive citizens someday. After bathing the children, all of them were provided with a new set of clothes and then was later treated to lunch from a popular fast-food chain store where its “Mascot” also entertained them. Later on, two local magicians amazed the children who also included those coming from Consolacion and Cordova towns.

Parlor games were also held to further entertain them before they were treated with some icecream in a cone. It was capped by the giving of goodies to all of them to take home that included some groceries. The activity was held at the sprawling space of the Malacanang sa Sugbu in the Aduana./AAJ 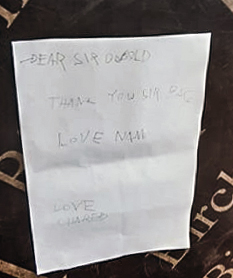