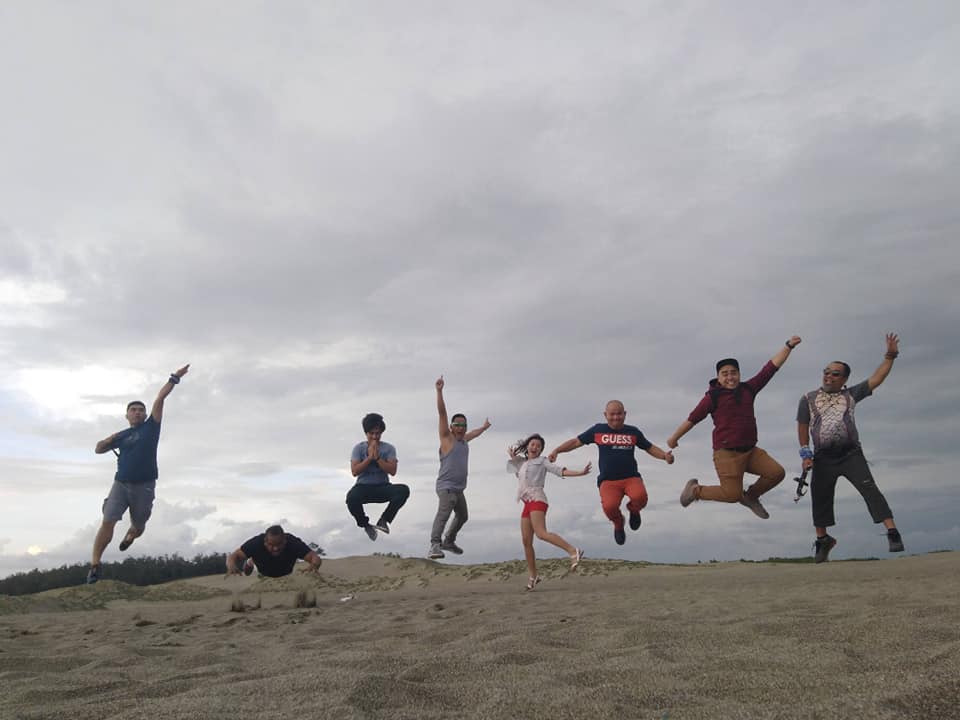 Nine years ago, I stepped foot on the northernmost part of Luzon in an inter-Philippine Trade Mission and explored the renowned heritage sites of Ilocos Region — Laoag City and Vigan City — together with the 23-member delegation of the Cebu Chamber of Commerce and Industry (CCCI).

For the second time around, I was privileged to visit and explore the top tourist destinations in this province which is rich in history, littered with natural beauty, and booming with good food together with the Cebu Media and Bloggers on an educational and familiarization tour last July.

Upon our arrival in Laoag City, we had lunch and tried the authentic Ilocano dishes at La Preciosa Restaurant, one of Laoag City’s culinary gems. Our guide brought us immediately to Museo Ilocos Norte and Taoid Museum which housed the collections of art, sculpture, artifacts, historical and traditional beliefs, fashion, handwoven textile and everything there is to know about the Ilocos Region. Most of those displayed are personal collections of Senator Imee Marcos.

Our next stop was at the Malacañang of the North which is a sprawling compound found at the shores of Paoay Lake, built as the official residence of the late President Ferdinand Marcos. This is now a museum which houses the memorabilia of the former President. Then, we visited Paoay Church, inscribed as a UNESCO World Heritage Site. These are frequent features in any Ilocos tour.

We never got to rest on our first day even if we flew very early in the morning from Cebu. Our guide let our group experience a physical activity thereon. It’s adventure time! I am not a sports enthusiast myself but because of curiosity, I was able to indulge myself in extreme sports, riding a 4×4 monster jeep where I really got to hold very firmly as our driver let us experience a rollercoaster ride at the vast sand dunes of Paoay, the only desert in Southeast Asia. Tourists can also try their Sand Boarding right after the exhilarating ride and capture the magnificent sunset facing the West Philippine Sea.

Our group was able to meet and interact with newly elected Ilocos Norte Governor Matthew Joseph Marcos-Manotoc who shared about his plans and visions for Ilocos Norte over dinner at Herencia Restaurant, home of the Pinakbet Pizza. 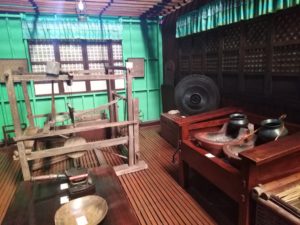 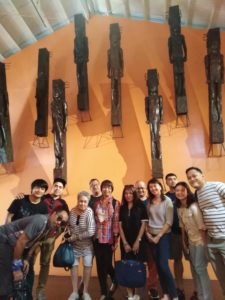 After a long day, we were able to check-in at The Fort Ilocandia Resort Hotel, the only five-star hotel and resort in Laoag City which hosted our two-night acco 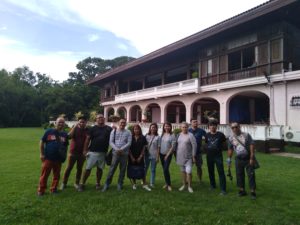 mmodation. The resort’s Assistant General Manager Richard Li, with his Director of Sales Sarita Ablan, treated us with a sumptuous dinner where we enjoyed their mouthwatering delectable choices of popular western dishes, as well as Philippine and Asian favorites. They also showed us around the resort’s facilities which has 290 luxurious and elegant, fully furnished rooms.  Each room has an individual balcony, where guests can enjoy the scenery straight from their rooms. Fort Ilocandia also has a prestigious world-class 18-hole golf course and provides a lot of leisure activities and choices such as water sports, horseback riding, hot air ballooning, tennis, archery and swimming at their semi-olympic sized pool. Fort Ilocandia can also accommodate 600-700 persons for conventions. In fact, the resort is hosting the coming 20th National Convention of the Association of Tourism Officers of the Philippines (ATOP) from October 2 to 5 this year.

On our second day, we left early from the resort and had fun under the Ilocos sun. We passed by Cape Bojeador Lighthouse, the tallest in the Philippines and a cultural heritage structure in Burgos, Ilocos Norte facing the northern portion of the South China Sea. All the way up north to Pagudpud, I was so excited to see their long stretch of white sand beach in Saud beach, Bangui Windmills and Burgos Windfarm. Ilocos Norte is known as the renewable energy capital of Southeast Asia. There are more than a hundred gigantic turbines that can generate 1.65 MW in each windmill. Our guided tour in Ilocos Norte ended at Kapurpurawan where we got to see the amazing rock formations shaped by the powerful waves and winds.

VIGAN CITY: WHERE THE PAST IS A POWERFUL PRESENCE

On our third day, we headed down south to Vigan City, Ilocos Sur — a two hour drive from Laoag City. Vigan was recently listed as one of the New7Wonders Cities of the World and this vibrant historical city is also a UNESCO World Heritage Site. 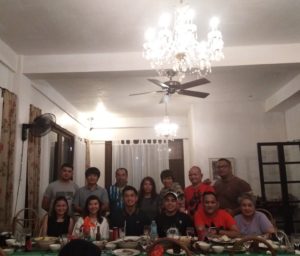 The Vigan City Government, through its energetic Former Mayor Eva Marie Singson Medina, who is the mother of Carlo Medina, the current Mayor of Vigan City, hosted a welcome lunch for the group at her residence. Former Mayor Medina shared to the Cebu Media how she managed the city’s affairs and preserved its tangible and intangible heritage through the efforts of the City Government and its constituents. We were also entertained and serenaded by the Vigan City Cultural Troupe, showcasing the Zarsuelas presentation of the history of Vigan where the performers are all employees of the local government. I was fascinated by the rich culture and history.

While we were in Vigan, it brought back the mood of the historic Spanish times. The town center is small and compact yet full of excitement. We experienced the grandeur of the past as we strolled down the cobblestone streets and alongside ancestral houses in Calle Crisologo, an excellent spot to shop for antiques and souvenir items. I myself did try an excellent calesa ride at the Heritage Village.  It is also safe to walk around at night.

The 16th century churches, bell tower, local handicrafts and native delicacies truly gave us a glimpse of the rich culture and history of its people, especially when we visited their museums showcasing archeological artifacts, relics, pottery and porcelains. Our gracious host Former Mayor Medina proudly showed us around the new Vigan Convention Center which was built for conventions, conferences, seminars, exhibits, special events and gatherings. A quick tour was also organized for us at the Vigan Conservation Complex that houses three museums, a repository of archives, a conservation school and a dormitory. The highlight of our Vigan tour was when we were given the chance to wear the colonial period costumes which tourists can rent for photo ops at the Arce Mansion, one of the oldest structures in the city. 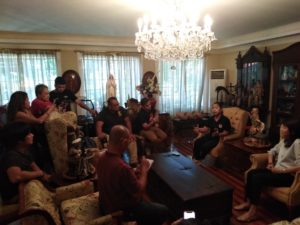 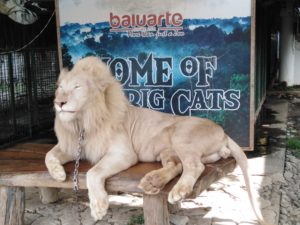 Never miss to visit former Governor Luis “Chavit” Singson’s Baluarte which features a mini zoo, skeet shooting range, pony rides and animal show. Feel the thrill of molding your own jars in Pagburnayan where traditional burnay jars of varied shapes, designs and sizes are made. Also experience the traditional art of handloom weaving as they offer a variety of intricately designed colorful Abel Iloco woven materials on sale.

Ilocos is also known for its native cuisine. 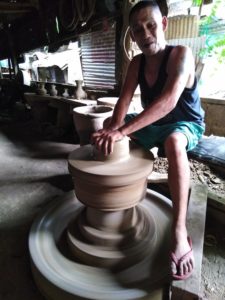 Three nights and four days if touring the Ilocos Region was indeed a wonderful experience. Philip Lo and his wife Cristina, together with her mom Un Liu Chan and siblings Lucy Barba, Rosemarie Lim and Romeo Chan made sure that our stay in Ilocos was memorable. It went beyond our expectations. They prepared pasalubong and cooked special Bagnet for our group which we took back home to Cebu.

Getting there: Domestic flights leave Manila daily for Laoag City in Ilocos Norte, which is a two-hour ride by bus or arranged vehicles to Vigan. By land, the 408 km. stretch from Manila to Vigan City is a comfortable eight hour ride along the scenic Manila-Ilocos Highway.