CEBU CITY, PHILIPPINES- The don’t go for donuts (doughnuts) literally but rather they looked for donut shape items – spare tires of vehicles.

So they are called “Donut Gang” and two of them were arrested yesterday afternoon, August 18, 2019, in a junkyard fronting a known shopping mall at the Cebu City North Reclamation Area.

Richard Rosos, 23, of Barangay Mabolo and his cohort, a 15 year-old minor, were collared past 5pm by the team of Provincial Intelligence Branch (PIB) agents led by Lt. Col. Marlu Conag.

Conag reported to Cebu Provincial Police Director Col. Roderick Mariano that the two were arrested on a hot pursuit operation after an earlier arrest of alleged carnappers in Catmon town. 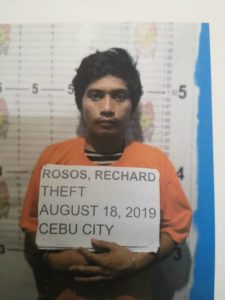 The suspected  squealed that they would bring to the junkyard their stolen items.

Among the seized items incidental to the arrest of the two were assorted spare tires, tools and truck batteries.

Meanwhile, in a separate operation, a person with a warrant of  arrest for attempted homicide was arrested earlier today in Naga City.

Ocampo is presently detained and will be presented to the court which earlier recommended a bail of P120,000.00 for his temporary liberty./AJ with a report from Che Brusas