PUERTO Princesa, Palawan –With so much walking involved in Day 1, I woke up at 7:30 AM. It was an exhausting day that even without an alcoholic beverage I was able to sleep soundly (or snoring-ly) for 8 hours. My Smart Care app revealed that I accumulated a total of 12,832 steps that is more than the minimum 10K steps suggested, burnt 315 Kcalories and walked a total 9.23 kilometers (the count started back home). Not bad!

I looked over at my left, Christian was still sleeping. The TV was still on, indicating that neither of us had enough strength to press the red button. It was locked in at National Geographic Channel. At first, I had no idea what I was watching. Two teams of 4 amateur mechanics each scoured a scrap yard searching for a car from the tons of wreckage. One team found a 4-door Blue BMW sedan, while the other chose a 3-door white Volkswagen Scirocco among the thousands of wrecked automobiles.

The challenge, both teams had to build a racing machine out from the knocked down cars inside the scrap yard. Using parts from the other cars as replacement materials. Each team was given 4-days to complete the task. Unfortunately, the Volkswagen team failed to complete the task, giving the win to the BMW team who did not just complete the job but managed to convert a junked car into a mean racing machine and get the ‘Gear Trophy.’ The name of the program is Scrapyard Supercars, it was wicked! Then it was followed by a 30-seconder documentary of the progress of the 8.5-kilometer Cebu-Cordova Link Expressway. Wow! The construction really caught the fancy of the world!

Moments later my phone rang, as usual, my caller was Cebu City Sports Commission vice-chairman Lorenzo Sy, who usually calls me every morning around 8-9:30 AM. His first question, how were the kids? What time did they arrive? The answer is yes! The Cebu City athletes arrived at Puerto Princesa port at 11:45 PM on August 24, safe and sound. So nice of him, he has always checked on the progress of the travel of our athletes. Who won’t? There was an LPA that strikes the Luzon area since Saturday. Our conversation startled my roommate and who wouldn’t, especially if your ring tone is Khalid’s Young, Dumb and Broke. So I told him that we best get our breakfast since it’s already 8:30 AM. He asked if we’d be having our breakfast at the nearby Jollibee outlet. I said no, our stay comes with free breakfast!

While eating toast and sipping noodle soup, a long-time colleague joined us – Lynde Salgados of Sun.Star CDO. I first met Lynde at the Palarong Pambansa coverage in SOCKSARGEN! Whoa! That was a very long time! This basketball-playing sports editor who sidelined as a rackista hasn’t aged a bit. After sharing pleasantries, our conversation turned from Jaime Frias, a chess-playing colleague, and a former barangay captain of Barangay 23 in Cagayan de Oro City, who just won chess title in Abu Dhabi to every Bisaya sportswriter’s friend – the gentle giant Jack Biantan. Who would forget Jack? Me? I can’t, and I won’t! Jack has touched so many lives in Cebu, not only poor football players but also on me. He recruited me to work at Sun.Star back in 1999. Godspeed to you Jackie.

Moments later, Frank Calapre came down to have his breakfast also. Frank recruited me to work for him at Independent Post back in 1997. We did our first out-of-Cebu coverage together in Davao City National Amateur Boxing Championship in 1996. Frank was then a writer for Sun.Star and I wrote for The Freeman and reported to DYMF Bombo Radyo-Cebu. I didn’t miss Frankie Baby that much because we frequently meet in out-of-town coverages.

After I gobbled down the egg omelet and drank my second serving of coffee, we retired to our room to prepare for the press conference at the Puerto Princesa City Hall after lunch and the Opening Ceremony at the Speaker Ramon V. Mitra Sports Complex.

Christian decided to have a haircut, but as soon as he arrived at a posh saloon at Robinson’s Place the sooner he scurried to leave after learning that the price of a haircut is a whooping   P999!  He decided to go for a lesser P150 cut, after realizing that spending P1K for a haircut was too much. While Christian was away I took my time browsing for interesting facts about Palawan. I learned that our host city celebrates the Balayong Festival every March. For those who don’t know what a Balayong is, it is a kind of tree that bears pink flowers. It is popularly known as a Cherry Blossom Tree. Balayong flowers bloom every March here. And every March 4 Puerto Princesa celebrates the Balayong Day, to commemorate the city’s founding anniversary and a Balayong Festival will take place around this date.

I would book me-self a ticket for next year’s Balayong Festival. Still got six months to save. Who’s going with me? But you have to pay for your own!

On our way to the press conference, we tried to hail a jitney but we were told that it was out of the way, instead we were told to take a tricycle instead. The ‘dispatser’ told us it would cost us P60. We didn’t haggle, we did not complain, we agreed to the asking price. However, after a few meters, the driver asked us, how much did the ‘dispatser’ say the fare would be. We answered in unison “P60.” But manong driver told us NO, it’s only P10 per person. Accordingly, the city government told them not to collect too much from guests, especially those who were involved in the Batang Pinoy Finals. We offered P60 but he declined. So after we alighted, I handed him P20 with our gratitude and he accepted it with a smile. May God Bless you Manong Romy Bulawin! 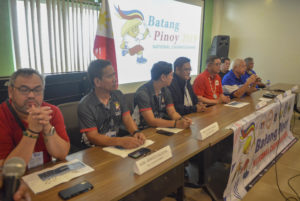 After the speeches and duet of Sen. Bong Go and Robin Padilla of the song Maging sino ka man, and the 20-minute fireworks display, which ended the opening program, we went back to our hotel to freshen up and get ready for the dinner that is thrown by Chairman Ramirez at the Kinabuch Grill and Bar at Rizal Avenue, where Lynde and I had two bottles of beer.

We resigned to our room after the hearty meals (enough to nourish my weary body which just did 5,887 steps at a length of 5.29 kilometers and burning 124K calories), wrote this journal and my story for the day and rest and be ready for the upcoming battle tomorrow. One gold medal is at stake at the track and field and another in the Rapid chess competition. Go Niños!.

By the way Happy Fiesta Barangay Inayawan in Cebu City. I missed the Lechon pabo, the alimango and the shrimps and the Jack Daniels and Johnny Double Black which was prepared by bai Willvin Appari for us. Next time na lang bai. Kanang naa na si PBA Ref Jerry Narandan. /RCM