PUERTO Princesa Palawan — Team Cebu City found a gold mine in the archery competition as Aldrener Igot Jr.  added not just one but three more gold medals to improve his chances to become the Batang Pinoy National Finals most bemedalled athlete after the second day of competition at the archery range of the Speaker Ramon V. Mitra Sports Complex in Sta. Monica.

The 14-year old Grade 9 student of Don Carlos A. Gothong Memorial National High School added the 40-meters gold, the 50-meter gold, and the Single FITA Round gold to Cebu City’s treasure chest while improving his chances to tie his six gold medals finish in the Visayas Regional elimination last February in Iloilo City.

Last Tuesday, Igot won the 20-meters and 30-meters gold and the Pasil resident archer is now motivated to sweep all his events that include the Mix Doubles and the Tri-Team competitions.

The Arnis team meanwhile has started to contribute gold medals into the coffers of Team Cebu City Ninos.

Meanwhile, Gio Begunia continued to bring honors to Cebu Province following his victory in the Javelin Throw event for Boys. Inspired by the compliments and adulation from his school mates, the 15-year old thrower from the Sisters of Mary School Boystown in Tungkop, Minglanilla recorded his best throw at 46.05 meters, which was nearly three meters longer than the accomplishment of his silver medallist Noel Fuentes of South Cotabato Province which recorded 43.42-meter distance.

Allan Diaz of Pangasinan Province snatched the bronze medal after tallying a 42.61m distance. This is Begunia’s second gold medal, which could have been his third if did not bomb out of the competition in the Discus Throw event after incurring three fouls. Cebu City failed to win a medal in today’s athletic events.

Meanwhile, Pathricia Mae Sumalinog was the lone female Cebu City boxer who will march in tomorrow’s semifinal round following her 5-0 unanimous decision win over Marilou Jardeliza of Sultan Kudarat in the Jr. Girls light flyweight (48kgs) boxing match at the Mendoza Park in downtown Puerto Princesa.

Sumalinog’s ring experience was evident against the taller Jardeliza who had no match for the Brgy. Ermita-resident. Sumalinog needed to be more aggressive and busy when she faces Joylee Ann Diawan of Benguit Province in the semifinal round which will start at 3 PM on Aug. 29, 2019-08-28

Her teammates, however, one by one fell out in the competition starting with Allthea Juezan who lost by unanimous decision to Vanesa Belarte of Bago City in the Jr. Girls Pin weight match, Jhea Jane Bacayan did not last long as he lost via Referee Stop Contest (RSC) to Alexa Tara de la Cruz of the host team Puerto Princesa City in 1:46 of the first round and Chadylle Bandiola yielded a slot to the semifinal round after she hurt her left should en route to losing by RSC in just 26 seconds of the opening bell.

Even Cebu City councilor and former PBA star Dondon Hontiveros was dismayed for the lack of training and preparation of the female boxers. It is now the right time that we revisit this grassroots volunteerism program of the Cebu City Sports Commission. I pity these girls because they are shoved in a tournament that they are not yet ready. It’s not enough that they have participated in the sports commission’s grassroots program. They need to be prepared. And we need to have a proper selection on who are the rightful players to be sent to competitions,” Hontiveros told iNews.Ph.

In the meantime, Softball pitcher Jhane Gingoyon is now in stable condition after her bout with dengue fever since Saturday. Gingoyon who was confined at the Palawan Provincial Hospital is now out of danger according to CCSC vice-chairman Lorenzo Sy, who went directly to the hospital from the airport after hearing reports that the all-around pitcher of Salazar Colleges of Science and Institute of Technology (SCSIT) was in serious condition.

“I was really worried when I heard of her (Gingoyon) condition. In my monitoring, she was already suffering fever while they were still on board the ship to Palawan. The first thing I did when I arrived here (Puerto Princesa) was to visit her. To know of her status, thankfully she is now ok and she started to eat solid food. I would like to thank the doctors in Palawan Provincial Hospital for giving their best to our athlete,” Sy told iNews.

Softball coach Dionisio Bacarisas was happy to know that her player is now recovering but was a bit frustrated because Gingyoyon is very valuable to the team.

“She is my number one pitcher. But she can also play in-field and shortstop position very efficiently. The team really needs her. Pero salamat na lang kay okay na siya,” Bacarisas added. RCM 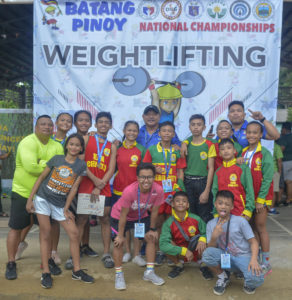