Games and Amusements Board (GAB) Chairman Abraham Kahlil Mitra wants the Panamanian boxing judge to answer the petitions that seeks his revocation of license as boxing ring official.

“I will let him answer po the petitions. He (Costa) has to refute the charges in writing. First in, first out,” Mitra told Inews.Ph in a phone interview.

The subject, Carlos Costa, should answer all the three petitions, Mitra added, as apart from the petitions of the Professional Boxing Officials of Central Visayas (PBOCV) and the Association of Philippine Professional Boxing Ring Officials (APPBRO-Luzon Chapter), a GAB officer also rendered an “incident report” involving Costa which was forwarded to the GAB board because of the Panamanian’s “behavior.”

Oliver Evangelista, Sports andj Games Regulations Officer (SGRO) of the GAB’s Boxing and Other Contact Sports Division detailed an incident last August 24, 2019, where allegedly Costa sought for several times that he be assigned as judge of other fights.

Costa allegedly told Evangelista that, “there is no such thing as rotation of (boxing) officials” which was considered as affront to the GAB leadership as Mitra himself announced that there will be “fair rotation” in the assigning of bout officials under his watch.

Mitra specifically mentioned “fair rotation” to the APPBRO members in a meeting last August 2016 in the GAB main office in Makati City.

According to the report of Evangelista, Costa initially talked to another GAB officer, Eduardo Coronel, to ask for another assignment, recalling Costa to have allegedly said, “Mr. Coronel, I want to be assigned in another fight. I went all the way here and you will assign me in a single fight.”

Coronel answered that there were already Metro Manila and Luzon ring officials who were assigned on a rotation basis that will given priority to the assignments but Costa allegedly pursued his request even until when Evangelista and other GAB personnel were in a rest room along with Costa.

The day that Evangelista claimed that Costa uttered to him about being assigned as ring judge was during the weigh-in of the Carlo Penalosa vs Maximino Flores IBO flyweight championship in the TV5 studio in Quezon City.

That night, Costa appeared as cornerman of Mexican Cesar Ramirez in the televised WBO interim bantamweight championship vs Johnriel Casimero where Evangelista also mentioned it in his report, prompting him and their incident to recommend that Costa “must rest.”

“With this behavior of Mr. Costa, I believe he must rest from being a boxing judge,” Evangelista wrote the GAB board through the GAB legal division dated September 2, 2019.

The “cornerman” job of Costa was also mentioned both by PBOCVand APPBRO where APPBRO called it as “conflict of interest.”

Costa is being described by APPBRO as “disqualified” to be a boxing judge as the Panamanian appears to be “tourist” who did not have the working permit with the Bureau of Immigration.

PBOCV on the other hand, questioned how Costa accumulated more than 150 boxing fights in his ledger as boxing judge despite being a judge only since May last year (167 fights per boxrec.com).

PBOCV claimed that Costa has lobbied to get the matches agreeing together with APPBRO that Costa’s writing for several boxing news sites has been used as “leverage” of Costa to boxing promoters describing it as a form of “lobbying” to have bout assignments.

A concrete example which both the boxing officials organization mentioned was the case of Engr.
Greg Ortega, a veteran boxing judge since 2009 who was replaced by Costa for the recent IBF minimum championship where Pedro Taduran beat Samuel Salva.

APPBRO who is led presently by Elmo Coloma has some of the big names of boxing officials in the country; international boxing refs Atty. Danrex Tapdasan and Ferdie Estrella and international boxing judge Atty. Aquil Tamano, who himself has been a former GAB Commissioner. 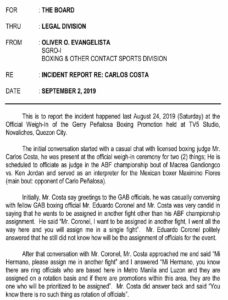 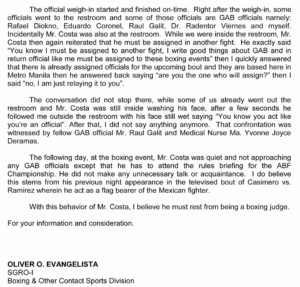