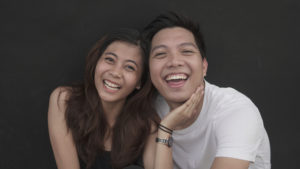 “I’m not a stranger to seeing myself on video, online,” shares Mantilla, who has been vlogging with a sizable amount of followers for two years now. “But actually seeing myself on TV, on MYX Philippines… it was heartening and encouraging and wonderfully validating.”

With lyrics by Ryan Ben Gabby Taborada and music by Vanessa Abad, the song “Di Na Ko Madutlan” is about finding that resolve to end an unhealthy relationship in which one is being made to feel wanted one moment then taken for granted the next. Cattski Espina of Room Eleven Recording Studio arranged the song to give it a contemporary pop/rock vibe that blends yearning, dejection, and indignation in crucial parts. The single made it to Spotify’s Alt Pop Rock and New Music Friday playlists.

Months after the single was released on digital streaming platforms, Viva Records commissioned for a music video to be produced. Tapped to direct it was Anthony Vios Uy, who immediately won over the songwriters and the singer with his concept.

“I thought about making something simple, to avoid taking people away from the poetry of the song, yet creative,” says Uy. “I came up with the idea after listening to the song and it reminded me of how I try to remember things in my past.”

The result is a love story told in reverse. For Uy, employing a reverse video “represented the inner struggles of the character, his memories, from the most recent leading up to the distant memory.”

A few weeks after completion of the music video, the team received word of its inclusion in MYX Philippines’ playlist. It is likewise playing on PBO, Cebu Cable, Viva TV, and regional radio stations.