Since 43 years ago, Sacred Heart Center has not undergone any facelift. Considered an institution in Cebu for functions and events, it had recently and the re-opening yesterday, Dec. 3, 2019, was a bit historic as no less than Cebu Archbishop, His Excellency Jose Palma blessed the refurbished facility which now has seven (7) function rooms, a cafe (Cafe Cristina) and sports facilities that included a basketball court, gym and swimming pool.

The center can now accommodate more clients as two larger rooms were made, their largest could cater to almost 1,000 persons (950 pax). Joyce Yang one of the Board of Directors said, the center could actually accommodate 3,000 if all of their function rooms would be utilized, at very reasonable rates compared to the other establishments.

“If you would go around, Sacred Heart is really the most affordable for a decent function,” Yang said. Cafe Cristina has board rooms for private meetings and a minimum of 50 persons could use their other rooms.

Ambassador Francisco Benedicto, the President of Sacred Heart Inc. along with Atty. Augusto Go of the University of Cebu and its allied companies were also around during the occasion which also coincided with the Feast of Saint Francis Xavier, Jesuit Saint and Patron of Missions.

SHPLA Inc. is a social enterprise that is involved in social actions and charitable activities, among them a daily feeding program in Zapatera Elementary School, catechism in non-sectarian schools, visitation to the sick and support to the social action programs of the Jesuit run parish.

Businessman Robert Dino, the father of Sec. Dino was around during the occasion. Sec. Dino himself graduated high school at the Sacred Heart School (batch of 1985)./AAJ 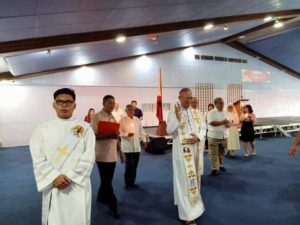 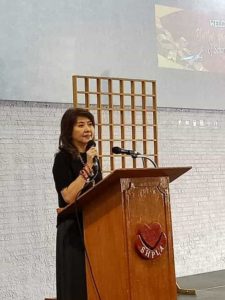