CEBU CITY, Philippines – After two years of hiatus, Mixed Martial Arts actions is back before the turn of the decade, this time it will be held at the cradle of Cebu’s shipbuilding industry, at the bustling western Cebu town of Balamban in Brgy. Buanoy Gym tonight, Dec. 30, 2019.

A total of 10 MMA bouts and four Muay Thai fights are prepared by the father of Cebu MMA Master Benigno “Ekin” Caniga Jr. in the promotion dubbed as “The Wait Fight Night,” an MMA and Muay Thai card under the Cebu Fighting Championship. 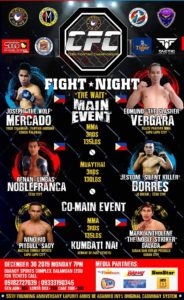 Topping the card is the three-rounder MMA bout between Coron Palawan native Joseph “The Wall” Mercado of Tribe Calamian/Team Yaw-Yan Ardigma against one of the game’s pioneer fighter Edmund “The Slasher” Vergara of the Black Panther MMA of Mandaue City in the 135lbs bound.

“I have a 20-5 win-loss professional record. All of my losses were decisions while all of my wins are all stoppage or submission. I started as an amateur boxer at 10 and started fighting MMA at the age of 18 that was in 2010,” Mercado said at the press conference.

This fight would be Mercado’s ticket to earn a bout in the One FC Championship.

The veteran Vergara, on the other hand, is unfazed with his opponent’s credentials.

“I am one of the pioneer fighters in Cebu MMA. I have fought MMA fights since 2004. Despite having fever before Christmas I still trained hard for this because I want to prove my capability as an MMA fighter,” explained Vergara, who is deadly in striking.

Prior to the MMA finale match Renan “Limbas” Noblefranca of Yaw-Yan Ardigma  will also display his skills against Jestoni “Silent Killer” Borres of JB Dream Fitness Gym in a 3-round Muay Thai match.

Local promoters, Arnis GM Edgar Caburnay and Gino Galvez admitted they had mixed feelings promoting an MMA/Muay Thai, as this is the first time for Balamban.

“In our postering, many people would ask if this is a boxing promotion and we could only say that this is more than boxing because this is the ultimate fighting. (We have) mixed feelings because as of now we don’t know how will the people of Balamban will accept this promotion. All we knew is that this is an exciting promotion,” stressed Galvez.

Tickets are sold for P100 for general admission, P200 for the lower box and P300 for the ring side seats./RCM