CEBU City, Philippines –Joseph “The Wolf” Mercado of the Tribe Calamian/Yaw-Yan Ardigma made a short workout for submission victory by a rear-naked choke maneuver over Edmund “The Slasher” Vergara of the Black Panther MMA in just 46 seconds of the first round in the main event of the “The Wait” MMA/Muay Thai promotion of the Yaw-Yan Ardigma, Muay Thai Association of the Philippines and Lapunti Arnis de Abanico International Original Caburnay System on Dec. 30 in Buanoy, Balamban.

The Coron, Palawan native Mercado did not wait much longer as he took the match to the ground shortly after the opening bell. And after a few seconds of resistance, the Mandaue City native striker was forced to tap out after failing to untangle from steel-like arms that choked his neck.

Noblefranca, endured a broken nose caused by a head butt in the opening round as he kept his balance and focus with a precise round-house kick to the body of Borres to score a unanimous nod from the judges.

The MMA bouts did not last long as the other matches did not reached the three rounds schedule.

Nino Rio “Pit Bull” Saoy of Lapu-Lapu City scored a submission win via ground and pound at the 3:19mark of the second round over Mark Antholene “Balaba” of Iligan City, Christian “The Eagle” Tabunag Team Ken MMA scored a knockout win over Alsharidz Damlani of Two Edge MMA at the 1:14 mark of the first round; Harold “The Spriggan” Tabalino of Project X Team Cebu also scored a ground and pound win over Mark “The Silencer” Otida of Aramas MMA Society.

Beethoven Quijano of Two-Edged MMA also won by tap out via ground and pound victory over Ruben Amoin of Durex Dragon MMA at the 2:15 mark of the first round and Albert Garnica of the 7-Stars MMA defeated Ariel Regodon of SSAR Team MMA via tap out at the 1:19 of the first round.

While the results of the other Muay Thai bouts Michael “The Undisputed” Rebayos beating Laurence “Bruce Lee” Bendijito on points, Jeson Maranga scored an RSC – Head over Edgar Huete at the 2:12 of the second round, Ramon Gabriel Delos Reyes forced Laurence Lee “Bulawi” Ramirez to quit on his stool at the start of the third round, Kim Bisbal also scored an RSC-Head win over Isaac Torres at the 1:59 of the first round.

Emmanuel Aron “Baby Face Assassin” Plaza scored a retirement win over Denmark “Kauban” Comaingking at the 2:37 mark of the second round, Ken Caburnay scored an RSC-Body win in 41seconds of the second round against Albert Ramirez and Jether Pio Jr. defeated Edgar Caburnay Jr. on points in the curtain-raiser match./RCM 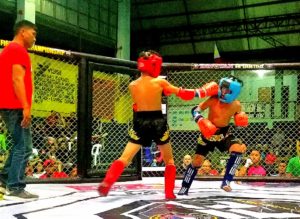 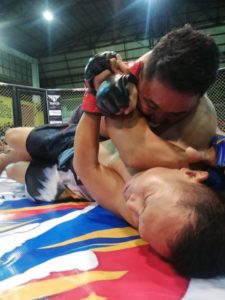 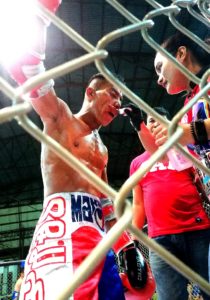