CEBU CITY, Philippines – The president responded positively to the personal invitation of Mayor Edgardo Labella to attend the Sinulog earlier this month as a chance for him to personally celebrate the important celebration with the Cebuanos.

President Rodrigo Roa Duterte first attended the inauguration of the Mactan-Cebu International airport (MCIA) Terminal 1 then arrived at the Cebu city sports center at around 6 in the evening during the ritual showdown of the different competing contingents of the Sinulog. 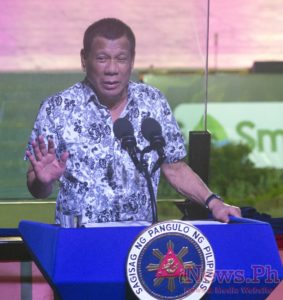 Secretary Michael Dino of the Office of the Presidential Assistant for the Visayas and Cebu City Mayor Edgardo Labella along with the other officials welcomed the president in his official visit to Cebu.

The president gave his speech inside the CCSC after the guest contingent from the Cebu city provincial government lead by Governor Gwen Garcia performed.

He witnessed the performance of Alcoy’s Siloy festival with Cebu Governor Garcia and the Lumad Basakanon from Brgy. San Nicolas.

He emphasized in his speech that he will help Cebu in solving the traffic problem. He also promised to also look for ways and funds on the traffic solutions in Cebu city like having railways.

Sinulog is already on its 40th year this year with 31 dancing contingents from Cebu city, Cebu province and other out-of-town delegations. There are also foreign contingents who joined the contest.