Jimmy Butler logged his first triple-double in the NBA Finals as the Miami Heat found a way to beat the heavily favored Los Angeles Lakers 115-104 in Game 3. 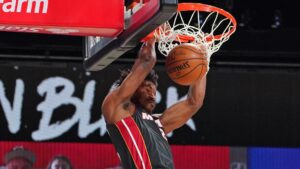 The high-spirited Heat was persistent all game long, forcing the Lakers to commit strings of errors to win the game. Miami played without Bam Adebayo and Goran Dragic, who was sidelined due to injuries, for the second straight game.

Miami turned to its defense and forced the Lakers to commit 19 turnovers, 10 made in the first quarter alone. In addition, the Heat dictated the tempo of the game, allowing Los Angeles to lead only twice while leading by double digits four times including the final count.

In contrast, the Lakers struggled on both offense and defense.

Despite the egging of LeBron James, it seems basketball was so hard for the Lakers who could not sink the shots they used to make in the first two games of the series. James leads the Lakers scorers with 25 points, 10 rebounds, 8 assists and two blocks in 39 minutes.

Kelly Olynyk came off the and fired 17 points, Tyler Herro also had 17 points, Duncan Robinson finished with 13 points and Jae Crowder added with 12 for Miami while Markieff Morris and Kyle Kuzma tallied 19 points each and Davis contributed 15 points.